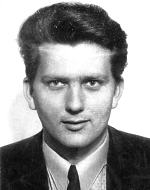 Knut was born in Swaziland; his parents were missionaries there. He grew up in Swaziland and got his education there. In 1968 he came to Norway and completed his education at Ansgar Theological Seminary in 1972. He then was called to serve as a pastor in a congregation in West Orange USA and stayed there for two years.

Yet Knut's heart was beating for the mission work. Together with his wife Sidsel Eilertsen Berge, he was approved for the mission work in Hong Kong in 1974. In December the same year their consecration held place in MCCN's congregation in the town of Drammen.

Their first outward journey to Hong Kong took place in late Jan 1975. Knut acquired a good knowledge of Cantonese and was particularly interested in the church work in the large city. Until then the MCCN missionaries had been concentrating on the institutionary work. The family spent four years in Hong Kong before returning to Norway.

Later on Knut has been working in shorter periods as a pastor in different MCCN congregations, for many years he worked as a refugee consultant in the southern parts of Norway. The family also served as missionaries for a couple of years in Swaziland for the Pentecostal Foreign Mission.