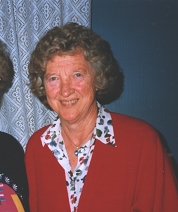 Together with her husband Bjorn, she went to England to study language (1 month) on 1 Aug 1977. Their first outward journey to Hong Kong via USA was done at 8 Sept 1977. She went home to Norway for a vacation on 8 Jun 1978. After that they both left for Hong Kong on the 12 Sept 1978. The family stayed in Hong Kong all in all for three years and then went back to Norway in 1980.

Karin grew up in the small town of Askim, in the southeast parts of Norway. In 1949 she married Bjorn Owesen, the year after they entered upon their service as missionaries. Together they went to Paris in 1951 to study language, and both made the superieur -exam that was necessary for being able to teach at the official schools of Congo-Brazzaville.

Teaching became the main task for Karin while staying for three periods in Congo-Brazzaville. After staying in Congo-Brazzaville she extended her education. She also served as a missionary together with her husband in Hong Kong. After returning to Norway, she taught at the Christian High School in Oslo until she retired.