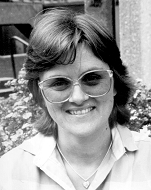 General Certification in 1972, Bible course at Ansgar School in 1972, household- and cooking class in 1973, educated to be a teacher at preschool/kindergarten in 1973-1976, further education in music and Norwegian in 1976-1977. Language studies.

Ingjerd worked as a teacher in Hong Kong:

Ingjerd grew up in Heimdal in the middle parts of Norway. Her father's engagement as MCCN's superintendent of the Norwegian middle part district made it natural for her to early on engage in the church's children and youth work.

After finishing her general certification exam and Bible course at Ansgar School in 1972, she received her preschool/kindergarten and music education. She worked as a preschool director. But the calling for a mission service was in her heart, and Hong Kong became her challenge. She entered upon to be a missionary in Hong Kong the summer of 1980, and only a couple of months she left for the big city.

Her eager studies let her to learn Cantonese, which came on very handy when she communicated with either the children or the parents at the kindergartens in Hong Kong, or in her contact with the members of the church, only a few people knew English. Ingjerd mostly was engaged in the work at kindergartens or in the congregations while she was in Hong Kong. But she also taught English, that being a part of expanding the number of people the church was in contact with.

She came back to Norway for the last time in 1990 after serving as a missionary for 7 years in the big city. She saw that the work had not been in vain; when she arrived in Hong Kong the first time, only a couple of congregations belonged to the Covenant Church in the city. Now the church is independent, it runs many social institutions and even its own mission. The work she was a part of has succeeded!

After returning to Norway in 1990 Ingjerd has been living in Heimdal and working as a teacher in a preschool.