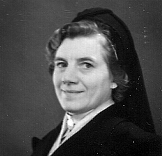 She made her first outward journey to Hong Kong in Aug1955 on a ship called "Hakon VI 3". Until 1957 Hannie was head nurse at the Haven of Hope Clinic by the refugee camp in Hong Kong. From 1958 she was working with children in Children's Garden, Hong Kong. The work was operated by an organization called Christian Children. In 1961 Hannie returned to Norway due to sickness.