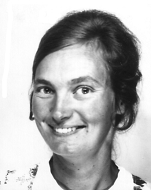 Randi worked as a nurse in Hong Kong. She also was MCCN's Secretary of Hong Kong Mission field, 1975-1992.

Randi was born in a small village called Roverud in the eastern part of Norway and grew up there. She was trained as a nurse and worked among other places at a cancer hospital in Norway. She was also educated to be an agronomist. While in Norway, she studied at Ansgar School and completed a one-year course in administration and leadership.

Randi Kvernhaugen went to Hong Kong as a missionary for MCCN in Sept 1975. In the first period she was particularly engaged in the work at Solbakken Centre for physical and psychical handicapped children. She also anticipated with enthusiasm other parts of the work where it was needed. Her first period in Hong Kong lasted as long as 6 years.

In 1983 Randi went back to Hong Kong. After some time she took over the responsibility as the MCCN's Mission Field Secretary. Four years later she came back to Norway and worked for two years as a consultant in the Foreign Mission Department in MCCN. The mission projects of the congregations were one of her main responsibilities.

Many people had the joy of meeting Randi in Hong Kong, where she truly enjoyed to be feeling at home and having a large responsibility. Others were inspired by her visits in the congregations and at the events and conferences done by MCCN in Norway. She is always in good spirit, with courage of life and enthusiasm.

Her capacity of work was needed in Hong Kong, so in 1990 she went back for her third period, again as the MCCN's Mission Field Secretary. After two years she had to break off the period. She had an extensive operation in a Hong Kong hospital and was sent home to Norway.