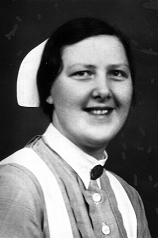 Education:
Secondary School, Nurse Training School 1931-1934, and China Inland Mission School in London. After that she took a course at the Hospital of Tropical Diseases, London.

Entering upon as a missionary:
26th Jun 1937 at the MCCN's Annual Conference in the town of Skien.

Annie worked as a nurse and MCCN's Mission Field Secretary of Hong Kong from 1953-1978.

From the day she was consecrated at MCCN's Annual Conference in 1937, to the last time she was in Hong Kong 50 years later, Annie served as a missionary. Before she had to leave China in 1951 as one of the last missionaries to leave the country, Annie made it to serve in Mainland China for two long periods. Under very simple circumstances she had worked for 12 years among the Chinese people in the mountains of China.

A closed door to communist-China became a calling for Sister Annie to go to Hong Kong. She kept on working for over 30 years in Hong Kong. At first no one would take her in and accept her zeal to aid, and the mission leaders in Norway could not guarantee for any financial support. The needs and suffering of the Chinese refugees became her calling. Together with missionary Hannie Gronlund she started to work.

With empty hands - but trust in God - sister Annie started to work among the poorest people in the refugee camp Rennies Mill. There were many experiences of God's care and answers to prayer in those days. The women in missionary groups all over Norway were praying. Friends from different countries gave their support, and the medical work developed. The Norwegian Refugee Board was engaged in the work and the Haven of Hope Hospital was growing bigger with more departments/units. What once was a simple shed is now a modern hospital.

For her contribution to the Hong Kong community and the Chinese people, Annie was awarded the Florence Nightingale medal in May 1961. In 1963 Annie was awarded a Norwegian Royal Order for her humanitarian work, and in Apr 1979 the Order of the British Empire.